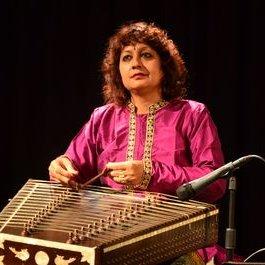 Meet Shruti Adhikari, she is a Santoor player. Her #shefoughtback journey started when she chose music as her career and it became an intrinsic part of her very being. She was born in Bhopal and is the granddaughter of Gaayan Acharya Pandit Balabahi Umedkar “Kundal” Guru, who is the last court musician of the Gwalior Kingdom. She began her training at the tender age of five. Trained in vocal and instrumental music like Sitar, Violin, Santoor, Harmonium, and Tabla. She was the first woman santoorist to be featured in the inaugural Indian Council for Cultural Relations ‘Horizon Series’ in Bhopal.
She has a strong academic lineage as well, acquired a postgraduate degree in Indian Classical Vocal Music with distinction, Kovid in Sitar with Gold Medal, Prabhakar in Tabla & Vid in Violin with distinctions. She also owns a musical group named “Panchnaad” consisting of five female Indian Classical Music Instrumentalists, which is the only female group of its own performing Indian Classical Music concerts across India.