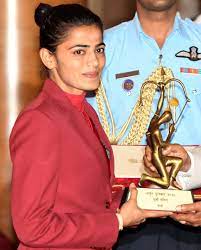 Savita Punia is a women Hockey Goalkeeper, who proved “The Great Wall” by thwarting every attempt by the Australian team to score a goal.
Her shefoughtback journey starts when she choose this field of sports, she has a love for Hockey since her childhood days. Once she had been to Delhi to watch a hockey match with her grandfather, Ranjeet Punia and she liked the sport instantly. After coming back to Jodhkan, her grandfather encouraged her to play sports. Before Savita, no one among the Punias had ever taken up any kind of sport as a career but her family always sported her.
She used to travel 30 kilometres from Jodhkan village to Maharaja Agrasain Girls Senior Secondary School in Sirsa town to hone her hockey skills six times a week. The school was the only place near her village where there were hockey coaches as well as infrastructure. In her early days of travelling she used to travel through public transport bus, where she faced one of the worst problems that plagues the country eve-teasing. She used to tell her father after coming back home from her practice, that boys tease me in the bus. But these were things only which made her stronger. Her father always used to say, “Every performance of my daughter for the country is a slap on the face of those boys.”