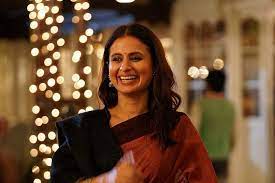 Rasika Dugal, is an Indian actress. She is best known for her roles in several Indian movies, television shows and web series. Her shefoughtback journey starts when she entered college, with the same ambition to be doctor or engineer, but suddenly everything changed there were many talented people around her dancers & artists, she had opened the door to a whole new world. She explored dance & drama. She once got to know about acting course and applied for that, at starting days she was very confused like ‘what all this is about?’ but as the time passed within 6 month she knew that she wanted to do this only. When her acting course ended, she desired to be an actor.
She was advised against doing small roles, but still did 14 films where she had small parts including an Anurag Kashyap film, and she was very proud of that.
And then she got a lead in a film called Kshay. Somehow the movie got made & premiered at the Chicago International Film Festival. After Kshay, she got offered more roles, even worked with Irfan in Qissa. And then, she almost signed 5 films but none worked out, producers said she wasn’t ‘sellable’. It was the lowest time in her career.
Still, she never gave a second thought to leave this profession of being an actor, she always believed something good would come in her way. One day, it happened she was casted in Manto & that changed everything for her and then, Mirzapur happened.
She said, “Throughout my life I’ve never had one particular goal. From wanting to be a doctor to pursuing acting on a whim, I’ve been all over the place. But I’ve always trusted my instinct & that brought me here So if I could, that’s what I’d tell 18-year-old Rasika ‘You’re doing the right things, don’t second guess it.”