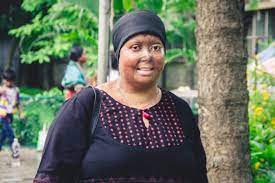 Pragya Singh an acid attack survivor Her Shefoughtback journey starts from 2006 when she was travelling from Varanasi to Delhi to attend her campus placement interview. Around 2 am she woke up with a burning sensation in her body. She thought she must have contracted some rare disease on the train. But fortunately, there was a doctor in the next bogie who said that this was not a disease or ordinary burn injury this is an acid attack. As before her marriage she had received a marriage proposal from a distant relative but she, as well as her parents rejected the proposal and that boy threatened to ruin her life, he was the culprit who attacked her with the acid.
Now as fighter Pragya has associated herself with CSAAAW campaign as well as she’s even trying to formulate a plan, based on which victims can take up jobs like stitching, embroidery etc. and earn a decent income to become self-reliant and independent