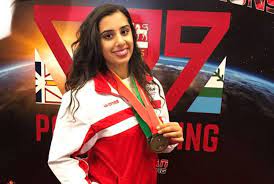 A 25-year old first Sikh woman to represent Britain at the World Classic Powerlifting Championships, Karenjeet Kaur Bains. Her shefoughtback journey starts when she started her sporting life as a sprinter, but when she took up powerlifting at the age of 17. Initially to get faster and more explosive for athletics her focus soon changed. As her father is a former bodybuilder and powerlifting player, under his guidance she quickly demonstrated her squat, bench press and deadlift skills. Three months later she entered and won her first contest.

Initially when she started powerlifting, she was one year shy of being an adult. In Punjab, she didn’t have the same chances or opportunities as her brothers had. However, her parents never treated their children unequally. They pushed all of them to do and be better. This is what helped Karenjeet kaur bains to make a mark in history as the first Sikh woman to represent Britain at the World Classic Powerlifting Championships, which ran from June of 2019. And now she wants to inspire more women to take up strength sports.