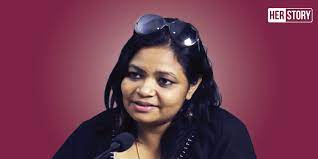 Deepa Aathreya, the lady who believed in “apna time aaayega” she is a successful Chennai-based entrepreneur with the School of Success, this is a ‘classroom without walls’. Her shefoughtback journey started when she went through intense struggle from childhood to become the person she is a today.
She was born obese, was a failure in school, was mocked for her weight, and called ‘baby elephant’. She was motivated by a teacher and that transformed her life for good. Once her birthday party was themed ‘Go Green’. This was 17-18 years ago, and the concept was quite unheard but turned out to be a hit. People started asking her to conduct summer camps. Later, she introduced a concept called ‘Leadership for kids’, helping children take charge of their lives at a young age. But within a couple of years, She was bankrupt, She lost everything just like in movie, her home, car everything. She pulled her son out of school because she was not able to pay the fee. The only thought that was running through her mind was how to survive. But she had to stay strong for her husband and son. She then started selling balloons at Besant Nagar beach in the evenings. At that time she started an initiative ‘Be the Change’, a social movement where children drive real life social causes. It was noticeable by the media and from there the bloom period started for her. This was the modest beginning to the School of Success, a venture that provides programs to teachers, parents, and students and caters to over 2,500 schools across the country.