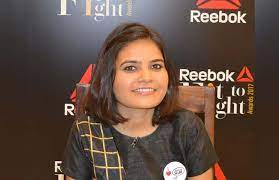 Chandni Khan born in slum area and now working for the development of slums children. She is an Indian activist and editor working for the welfare of street children in different parts of India. Her shefoughtback journey starts from the time she was born, she grew up in a slum and from the age of five started performing street magic shows and picking up rags along with her father. Her father passed away at a very early age and she became responsible for her family and struggled to earn Rs 30 in a day.
A few volunteers from Badhte Kadam, an NGO, enrolled her in educational classes they were organizing in the slums. So, at the age of 10, Chandni picked up a pencil and learned how to read and write. She continued working for Badhte Kadam, helping them by opening of new education centers. It also opened up an opportunity for Chandni to work with a newspaper by and for slum kids – Balaknama, which now has a circulation of 5,000. All these activities prompted Chandni to start “Voice of Slum”, an NGO whose aim is to provide street children with basic amenities like health, education, and shelter.