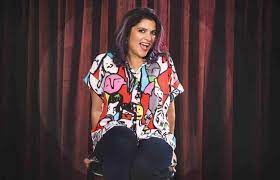 Aditi Mittal is from Mumbai and an Indian stand-up comedian, actress, and writer. One of the first women to do stand-up comedy in India. Her shefoughtback journey starts when she started her career as a comedian. As she had completed her education at Fairleigh Dickinson University in the UK, on a journalistic career and started to do a job in an Indian media channel in New York. The job, however, did not give her any satisfaction. So she decided to quit it and pursue her true passion, comedy.
She was one of the first 5 Indians to be featured in an Indians-only stand-up show called Local Heroes, organized by the U.K based “The Comedy Store” in 2019. And now she is a regular at Canvas Laugh Factory, Comedy Store Mumbai and has performed at venues and humor festivals across the country, clubs in the UK, and Laugh Factory, Los Angeles. She is also passionate about her health and lifestyle so we can see her posting workout videos on Instagram, Twitter and sharing a bit of her personal life on Facebook.