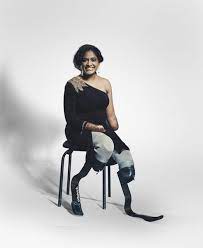 Shalini Saraswathi is an adventure enthusiast, blade runner, marathoner, public speaker, and Deputy General Manager at Firstsource Solutions. Her shefoughtback journey starts when she was returning from vacation with her husband after completing their fourth Anniversary trip. She was pregnant at the same time and a fever changed her life she was contracted with a rare bacterial disease called rickettsia with morts. She lost her baby, had survived multiple organ failures and slipped into a coma. She was almost about to die, the situation was very worst but she never lose her hope. She had to eventually get her limbs amputated while being bed-ridden for a year-and-a-half.
After the recovery, she won national competitions in the 100-meter category and now she is being trained to qualify for next year’s Paralympics in Japan. She is also a motivational speaker and blogger with her original series on Firework. She is also an Ambassador for Adventures beyond Barriers Foundation and is involved with Saviour of Soul, an NGO that works with the rehabilitation of sex workers and their children as well as Gender-Based Violence.